Story Behind the Picture: A Brief Pause 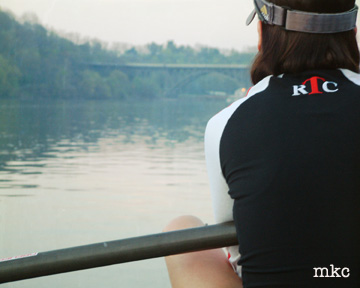 *I originally processed this photograph in black and white, yet when I decided to submit it for the “Score” exhibit at City Hall (Philadelphia) this summer, I decided to use the original, which allows the viewer to see the rosy, humid glow of the morning river. The exhibit, which includes this piece, is open from July 11 – September 16, 2011 an the opening reception is scheduled for Wednesday, July 20 from 5 – 7 pm, City Hall, 1st and 2nd Floor display cases, NE corner*

This is an image I see less frequently now that I am a mother of two and no longer
put in the grueling hours of training I once did. Now that my sole focus in life has
shifted away from simply moving a boat as fast I possibly could. Now that I’ve
achieved a modicum of balance and discovered that stepping away from the
competitive arena of rowing doesn’t mean having to leave it behind forever. But
this image is one that will stay with me, hopefully, even when most other details
in life fall out of focus. Rowing has brought me the dearest of friends. The kind of
people that became like family (or in my case, became my husband, even after I
hit him in the head with my boat). The friends that, a decade after college
graduation, still keep in touch. The friends that, when I moved to a new country,
welcomed me completely, made fun of my accent, and were my compass when I
needed one most. The friends that, despite our having to compete against one
another on a daily basis, were there to hold open the church doors at my wedding
and to hold my hand when I needed strength deeper than my own. The ones I
cheer for as they ﬁnish their PhDs, receive promotions, as they say “I do,” as they
drop off their dogs at my house on their way to the delivery room. The ones I hold
tight when they suffer the most unimaginable loss. The ones that I hope to have
in my life for decades to come. This photograph is our collective story: just a
moment to rest and take in the view, together, before setting off once again.