Story Behind the Picture: All I Want for Christmas… 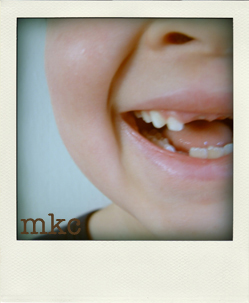 Bed time, as a rule, is 8:00 p.m. sharp, so when the boys’ door came flying open and Danny emerged singing “All I Want for Christmas is My Two Front Teeth,” loud enough to alert the whole neighborhood, I could only assume he’s spent the past ninety minutes in the dark, working feverishly to remove those aforementioned teeth.

Indeed he had: his toothless grin that night reminded me a bit of his earliest months when, before those same baby teeth appeared, he would always smile as wide as the ocean, showing nothing but gums. We found his tooth fairy box and placed it on the bureau, and tucked everyone back in (Lucas was of course awake and celebrating as well) to await the visit from the Tooth Fairy.

I would like to point out that the Tooth Fairy is really the most unsung hero of all the magical creatures that grace our homes in the middle of the night. Most people think Santa has the worst job, what with shimmying down the chimney and all, but really the worst job belongs to the Tooth Fairy. No one else has to sneak into the actual room of the excited child (and fly back out when the door squeaks and he sits up in bed), nor do they have to fumble around in the dark, stepping on unseen Legos and stubbing a toe on the corner of the desk. It’s a good thing the Tooth Fairy is a magical, well-behaved creature or else she might shout out a curse word or two before hobbling back into the hallway.

I vote we all start leaving cookies and milk for the Tooth Fairy on the night we expect her to visit – she’s certainly earned them.