Story Behind the Picture: Bad Dog 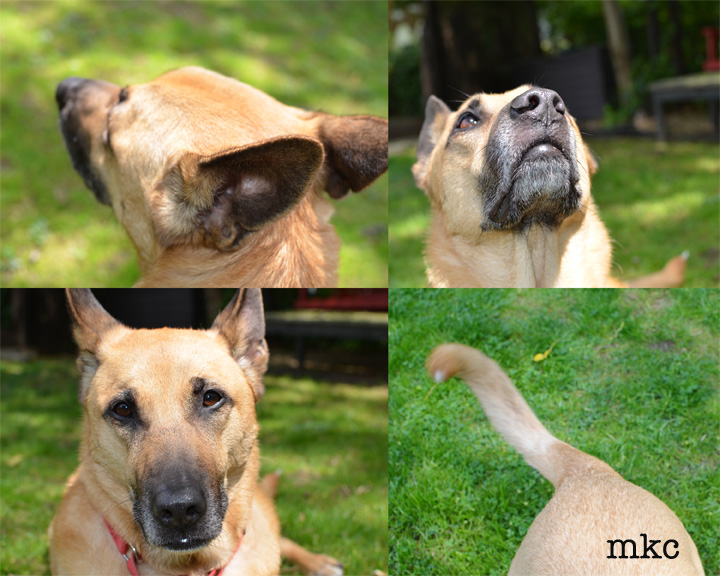 Meet Sheba: 80+ pounds of highly intelligent, squirrel-chasing, trash-can-raiding, hole-digging, command-ignoring dog. Last Friday, she decided to escape. She plotted for days. She examined the weakness in the system. She knew her closest ally. She seized the moment.

8:13 a.m.
My mother prepares to take the children to the bus stop on a morning when I’m away. There is the usual chaos in the mud room as shoes are tied and book-bags are gathered. Sheba convinces the four year-old to open the back door. The Great Escape is underway.

8:14 a.m.
Sheba begins to tunnel under the backyard fence.

8:15 a.m.
Sheba ignores repeated exhortations from my mother to please stop tunneling under the fence.

8:17 a.m.
A neighbor offers to take the seven year-old to the bus stop. My mother accepts, as she is afraid to leave Sheba alone given that she’s nearly completed her tunnel to freedom.

8:25 a.m.
Sheba still refuses to come back in the house. My mother decides to fetch the bag of rawhide bones in an attempt to lure her.

8:27 a.m.
Sheba captures entire bag of bones and guards them in the far corner of the lawn. On the bright side, at least she’s no longer digging her way to freedom.

8:35 a.m.
Sheba takes control of every toy on the property and stockpiles them in her corner. My mother contemplates murdering the dog.

8:40 a.m.
My mother sends the four-year-old inside to go to the bathroom. The four-year-old then decides he’ll lock the door behind him, just to be extra-safe while he’s in the house. My mother contemplates murdering the child.

8:59 a.m.
I arrive at my destination after traveling all morning and see that I have 17 missed calls from my mother’s cell phone. I suspect something, somewhere, has gone awry.

9:15 a.m.
I call in the reinforcements. My friend Colleen arrives moments later with an air of authority and Sheba instantly surrenders, no longer dedicated to escaping the confines of her comfortable existence. The four year-old has, in the mean time, unlocked the back door and, after one hour, my mother is no longer held captive in the backyard.

9:16 a.m.
My mother calls her Senator and asks to have this date declared “National Colleen Appreciation Day.” She also contemplates calling the local SPCA and telling them to come collect the dog, who is now passed out on the kitchen floor, covered in dirt, exhausted from the morning shenanigans.

9:19 a.m.
My mother calls to inform me the situation is now under control. She instructs me to stop laughing. I try. It doesn’t work. My mother contemplates murdering her daughter.

I return home that night to find Sheba gazing apologetically at my mother, following her at a respectful (but safe) distance. My mother gives in and finally pets her…even she isn’t immune to the charms of our incredibly bad dog.

More bad dog stories can be found here. And here. Oh, and here too.