Story Behind the Picture: Belfast 32 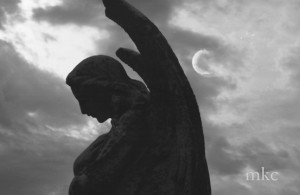 This week brings forward another photograph from the vault (I couldn’t come up with a more exciting name than “Belfast 32” as I shot more than 50 images of this statue in that isolated little cemetery by the sea). I broke many traditional rules of photography with this image, most importantly the one about never shooting into the sun. The haunting sun, however, is exactly what I wanted to capture: the heavy gray storm clouds were rolling past and did such beautiful things to the sky. It was windy and damp that day and it felt more like fall rather than the middle of summer: the wind blew so hard, on occasion, that I had to brace myself against a neighboring headstone to hold the camera still. The end effect is something rather dark and Gothic, but I think, in the end, that is what I love most about it.