Story Behind the Picture: Butterfly Sky 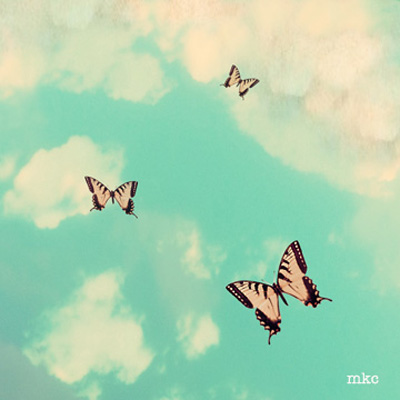 I’ve noticed something interesting in the past year – butterflies seem to make an appearance when I least expect them. Whether it’s in my work or in my garden, they seem to seek out my company. A little while ago, I spied something fluttering in our hydrangea leaves: it was a butterfly, partially entangled in a spider’s web. She kept trying to escape, but part of her wings were nearly fused together by the strength of the spider’s silk.

I normally don’t interfere with Mother Nature, but I admit to being very sentimental about these creatures and I decided to help. She stopped fluttering when I approached, and I unentangled her as best I could without actually touching her. She climbed into my hands once she was free, and I could see she had remnants of silk fibers still adhering to her wings. I gently set her on the sidewalk, where she proceeded to drag her wings along the cement, which was the perfect solution: the rough pavement caught at the silk and trapped it as she moved, allowing her to free herself from the rest of the fibers.

I ran back inside to fetch my camera, and captured a few images before she tested her wings and found them ready for flight.