Story Behind the Picture: Costume 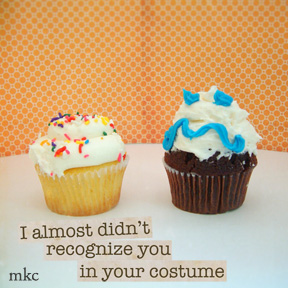 It’s October, so it must be time for the centuries-old costume battle between parents and children (I’ll head my mother off by admitting that I repeatedly changed my mind, even after she’d spent countless hours making a costume for me). This year my boys decided to be the sorcerer and his apprentice from Disney’s Fantasia. Hello, obscure. Nevertheless, we now have two sorcerer robes (thanks mom), two sorcerer hats (I do get to take some credit for these), and one child who now decides he instead wants to be Nate the Great, the young Sherlock-Holmes-esque character from the book series by the same name. Apparently I need to find a Sherlock-Holmes-esque detective hat or his life will be over. Good times.

So, this Halloween, if you live in my neighborhood and you see a sullen child trudging along in a blue sorcerer’s robe and matching hat covered in moons and stars because his mother refused to give in to his last-minute-costume-change demands, you’ll know that’s my son. And that sound you hear? That’s my mother laughing at the karmic revenge.

This print is part of the “Cupcake Conversations” 2011 calendar available here.