Story Behind the Picture: County Cork 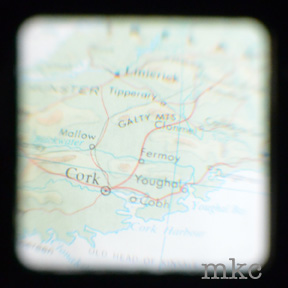 All these city blocks I’ve been creating for customers have both expanded my knowledge of geography and made me remember a story from my own family.

County Cork, Ireland. My great-grandfather, John Roche, meets Catherine Brennan and falls in love. As for Catherine? Not so much. He pursues. She resists. He pursues some more. She decides moving to America might be the only way to be rid of him. She hops a ship to New York and makes her way down to Philadelphia. John finds out and promptly climbs aboard the next ship to track her down.

I’d like to point out that if this happened in 2011, we’d call it stalking. Because this happened 100 years ago, it’s called “romantic.”

John finds Catherine in Philadelphia. Apparently she is either finally a) overcome with love or b) overcome by exhaustion and she decides marrying him will finally put a stop to all the nonsense. They open a jewelry store together and he insists she wear white gloves while at work because he’s certain the male customers lust after her beautiful hands (it was her hands, according to him, that brought him across the ocean).

I’m inclined to think she had other assets worth pursuing, but those were inappropriate to share with their four daughters when he told this story.

John Roche from County Cork, Ireland also goes on to be one of the first four people to own a car in Philadelphia and was often spotted driving on the sidewalks when the streets became to clogged for his liking. But that, of course, is another story, entirely…