Story Behind the Picture: Empire State of Mind 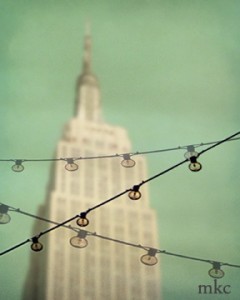 New York was the first American soil my great-grandmother encountered when she arrived here. She spoke no English. She read no English. She made the trip with her young son, following my great-grandfather one year after he originally left Italy. The first thing she saw on American soil was a candy vendor selling gumdrops on the street corner. She had never seen such a thing, certainly never tasted such a thing. She told her children, for years after, that the consistency shocked her: she loved them, but never expected them to stick in her teeth.

I wish I had met her. I wish we could have compared stories about moving to another country, about strange foreign food, about being brave. I wish I knew what flavor gumdrop she liked best.

None of my great-grandparents were born in this country. They all crossed the Atlantic with their own stories. They all looked at the skyline of a new city, saw the lights, and dreamed their dreams. And they gave those dreams to me.