Story Behind the Picture: Escape from New York 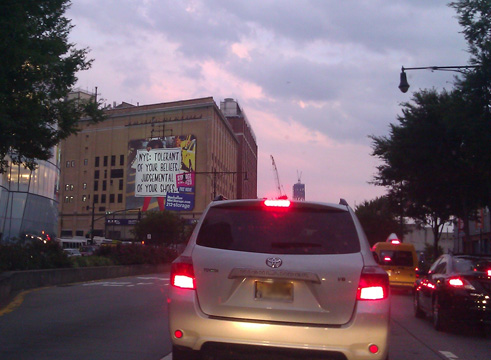 First, it’s been ages since I’ve posted something here. I’ve been repeatedly asked about this, and to all the inquirers, I simultaneously apologize and blame the lack of posts on the fog of NYC preparation in which I’ve been for the entire month of August. Now that the New York International Gift Fair is over, I can relax again. Except, of course, for all the art block and table runner making I’ve got to do in the next three weeks.

I think this photo sums up our week in New York pretty well (in case you can’t see it, the sign reads “NYC: Tolerant of your beliefs, judgemental of your shoes.”). Lots of traffic (imagine the horns honking, if you will), funny signs and people (and by “funny,” I mean both “amusing” and “freakishly odd”), and a shocking lack of quiet or down time, ever, anywhere (even a run in pre-dawn Central Park was chaotic, what with all the cyclists and fellow joggers and random people hanging out on benches).

There are some beautiful, serene, quiet bits of New York, I’m sure. I just didn’t see any of them.

I enjoy New Yorkers: they make me laugh, usually in a good way. I loved seeing the construction of One World Trade Center (visible just over the roof of the car in the terribly shot camera phone photograph above). I was ecstatic to return to Philadelphia, a city where, generally speaking, nodding a polite greeting to a fellow runner isn’t perceived as threatening.

While I do enjoy visiting, I probably spent too many years in the South to ever survive as a long-term resident of NYC. And my shoes are not nearly cool enough.