Story Behind the Picture: Fledgling 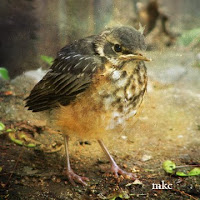 Our backyard is a virtual aviary – the songs of jays, robins, doves, sparrows (and a myriad of other birds I can’t identify) happily drown out the noisy city traffic. I was surprised, however, when a robin family chose to deposit their newest fledgling in our yard. We have two dogs and two boys – not really a tranquil setting for baby birds – but perhaps they thought he’d fit in with us. He wandered about, hopping onto a deflated soccer ball (favorite dog toy), perching on the little slide (usually inhabited by Lucas), investigating the wiffle ball that went sailing past him (Danny’s home run for the day). He let the boys come within three feet before he’d lift his fluffy body and use his impossibly long legs to scurry for cover under the ivy that adorns our fence. He was, however, a true toddler: three second later he’d come back, braver than one his size ought to be. I watched his mom and dad perch high above on the power lines that connect the garage to the main house. When he called out in his cranky “hungry voice,” they’d swoop down with worms, and occasionally make a fighter-plane-style pass over a dog’s head if they thought one wandered too close. We said goodnight as the sun set and I watched him wander about, enjoying his first evening out of the nest.

This morning he let the boys come within inches of his tiny yellow beak and he seemed oddly calm. A few hours later he was still in the same position: fluffy little body snuggled down into a patch of long green grass, his eyes barely open. I looked around for mom and dad, but did not see either one, which made me terribly sad: they would never have left a healthy fledgling unattended. “Mommy,” said Danny with a frown, “the baby bird seems really sleepy.” I found a pair of gardening gloves and gently picked him up, checking to see if he’d been injured. He seemed to be fine, other than the fact that he settled down into my gloved hands and closed his eyes. The boys gathered around and we watched him sleep, Lucas’ breath so close that it ruffled the baby down still peeking out from under the new adult feathers.

I came back out to the yard as the boys napped and stayed with him until he stopped breathing. I buried him in our flower bed and hoped, as I patted the damp earth back into place, that he enjoyed his day of freedom in our little yard.