Story Behind the Picture: Gloves and Flag 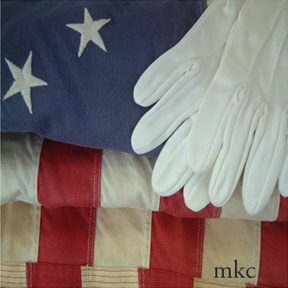 When people ask where I’m from, sometimes I say “everywhere.” I am the child of a Army officer, and while we moved less often than many families, I still recall that my parents did not reorder return address labels for a single house until my father retired.

One constant I always relied upon was the uniform: the shine on my father’s black shoes, the rustle of his Class A uniform jacket when he would return from work hours after I should have been asleep. His white gloves, though, were not something I ever saw: they lay tucked in a box in the back of his “office closet,” otherwise known as the overflowing container for all the various ephemera he collected over the decades. They look new, despite being significantly older than I am. He only wore them a few times, one of which was the day he buried his best friend after escorting his casket home from Vietnam. I’ve often wondered if he removed these gloves before he broke an insensitive journalist’s camera over his knee that same day. Probably not.

I chose the gloves and the flag over the more shiny and ornate things that come with a career in the military: the medals, insignias, rank, identification. These gloves and this flag are the quiet things, the ones that speak the most to the sacrifices that men, women, entire families make. They are a piece of every person who offers his or her life in service. They remind us to be quietly grateful for those who are willing to offer such a gift.

A portion of every purchase of this print will be donated to the Wounded Warrior Project.