Story Behind the Picture: Hydrangea 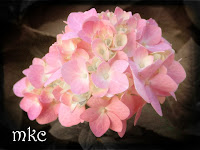 This hydrangea lives outside a firehouse in Old City, Philadelphia. I found it one sunny fall afternoon as my husband and boys watched the fire crew wash and detail one of their engines. Unlike the gentlemen, I was not quite as mesmerized by the shiny metal and vibrant red paint, so I strolled along the street, photographing the flowers that still bloomed in the early autumn warmth. As I worked, a woman approached. Her unwashed hair was streaked with gray, her clothes needed mending, and she held tight to her large, threadbare bag as though it was her habit to carefully guard this one possession. Her kind brown eyes completely disarmed me: I found myself smiling as she stopped next to the hydrangea.

“Would you like a portrait drawn?” she asked. “I’m an artist and I’d be happy to do one for you.” Danny had recently posed for a caricature at a local fair, but Lucas had refused to comply. “I would love a sketch of my youngest son,” I replied, “if we can convince him to sit still.” We found a little park nearby complete with fountain and pigeons for him to watch. We officially introduced ourselves, and Lucas sat quietly as Carol pulled out a thick tablet of paper and a blue magic marker. I have to admit that I was a little disappointed when I saw the marker…I assumed it would be a childish drawing, perhaps even as limited as my own abilities with pen and paper.

I looked away for a moment and watched the sun glint off the surface of the water, sending patterns of light over the brick walls of the courtyard. When I looked back at the tablet, tears welled in my eyes as I saw Lucas’ face coming to life on the paper. The shape of his chin, the waves of his hair, the length of his eyelashes: all masterfully captured by the talents of Carol’s weathered hands. She spoke to herself as she worked, muttering many things I could not understand. I did catch a few snippets of her life: her previous life as a teacher, a sister that lived in Michigan who begged Carol to come live with her. “Will you go stay with her?” I asked. “I’ll think about it,” she said quietly, never letting her eyes drift from the paper.

I saw Marty’s amused expression as I handed her more than the amount she requested for her services. “I’m surprised you trusted her,” he said after we said good-bye and we watched her shuffle away down the sidewalk. “My intuition told me she was a sweet lady,” I answered quietly, hoping Carol would let her family take care of her before the frigid winter weather took hold of the city and the lovely pink hydrangeas became wind-dried memories.