Story Behind the Picture: Lucy in the Sky With Diamonds 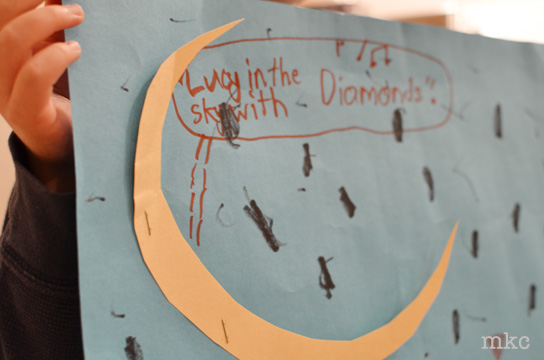 I didn’t know what exactly I would write about this week until Dan came home with this piece of artwork from school yesterday. This would usually be a story about something I’ve shot, but today, this story is about his creation.

Maybe it was the music. They way I sang aloud and danced and whistled all during the time he spent forming, growing, living inside me. Maybe I gave him the music that lives inside his (as he calls it) “singative” mind. Then again, I did nothing differently during my pregnancy with his younger brother and he doesn’t have Aspergers.

“What does “singative” mean?” I asked him, the first time Dan used that term.
“It’s like being talkative, but with music all time time instead of just plain words.”
“Does it ever go away, is your mind ever quiet?”
“No. But that’s okay. I like it.”

His favorite song when he finally grew large enough for me to feel his kicks? “The Two of Us” by the Beatles. He kept the rhythm perfectly, his tiny feet and legs bouncing to the beat, pressing against the confines of my skin with the precision of a metronome as I sang.

It’s always been about the Beatles for him. The day we brought his little brother home from the hospital, a two-year-old Danny sat next to the infant car seat and sang a perfectly on-tune section of “Across the Universe,” specifically repeating the phrase “nothin’s gonna change my world!” over and over, as though the the lyrics gave him the avenue to express his thoughts. We chuckled in the front seat and wanted to tell him that his world had already changed.

Five years later, the Beatles are still his main source of inspiration. He can easily express his thoughts without relying on their lyrics, but I often wonder what songs run though his mind in any given situation. His construction paper and markers tell me that Thursday was a “Lucy in the Sky With Diamonds” day.