Story Behind the Picture: “Old Friend” 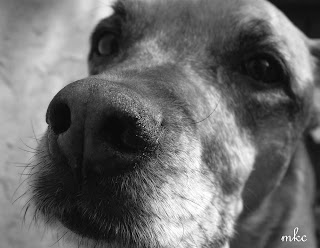 This is a portrait of our thirteen-year-old friend, Bronco. Bronco and I don’t often get along: he and my husband lived happily (and messily) together in bachelor bliss for five years until I entered the picture. Each time Bronco would stroll past, aloof and uninterested when we first met, I could hear him thinking “everything was fine until YOU came along.” In a way, he was right. No more sleeping on the couch. No more sleeping on the bed. No more digging holes in the lawn. No more free run of the house when the humans were away (he figured out how to open locked windows and would regularly escape). And then came the other animals, each one adopted as he had been. And then the children, climbing over him, using him as a step-stool, “petting” him with a little TOO much love, at times.
Bronco and I pass each other in the halls like two polite co-workers: occasionally we’ll stop for a chat (or a pet), but he’s made it clear he’s got more important things to do. Like nap. It makes me laugh because I know our aloof relationship is all a facade, an act. I know this because one day, years ago, Bronco saved me from two men who entered our home. They never had the chance to execute whatever their dark plans may have been: my fifty-pound mutt of completely unidentifiable origin made sure of that. And then, one year later, on a frigid November morning at the beach, Bronco was carried away by a rip-tide. I watched in horror as his head went under the waves and I jumped in after him, despite being fully clothed and very pregnant.
It took almost fifty attempts to take this picture: he was simply not interested in looking at me (although he is nearly blind, so eye contact isn’t really his strong suit anymore). Perhaps he didn’t hear my calls, my cajoles, for his hearing is certainly not what it used to be. Perhaps he was feeling grumpy because his hips are continuously sore. Perhaps his ego has been irrevocably bruised because he needs my help to climb the stairs at the end of each night. But then, as I was about to give up, I whispered his name softly. He turned to me, just once, and waited for the shutter to click.