Story Behind the Picture: Philadephia Skyline 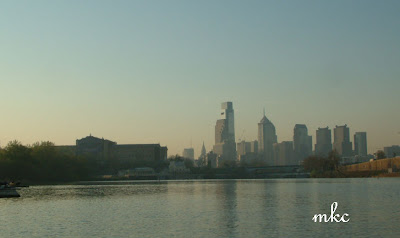 This is the view from the boathouses along the river: the Art Museum, City Hall, and all the other beautiful buildings that form the unmistakable Philadelphia skyline. This is where we met almost ten years ago. There were no rose petals, shooting stars, or serenades by strolling violin players. The Cliff’s Notes version? I hit him with my boat. In the head.

He was standing in the back of the boathouse, looking for something, and I walked in with my 26 foot single balanced on my head. My excuse, to this day, is that my eyes had yet to adjust from the bright sunlight.

He was not necessarily my type. I tended to like the kind of man that was “emotionally unavailable” (yes, that is an actual quote by an actual ex-boyfriend. Twenty dollars to the person who can tell me what on earth that really means). I fell for the arrogant ones who were, oddly, threatened by my own confidence. I seemed to like the ones that were less than honest and hid things about their past from me.

Yet there he was: unassuming, emotionally available, and completely honest. And, of course, grimacing and holding his head which I had just rammed with the bow of my boat. He likes to say he didn’t regain full consciousness until we were at the altar. This is usually the point where I hit him again.

For ten years I have been grateful for the perfect timing of that one morning row. I’d like to think that even when I’m 90, I’ll still remember the moment I realized I’d finally met the right one.