Story Behind the Picture: Piano Keys 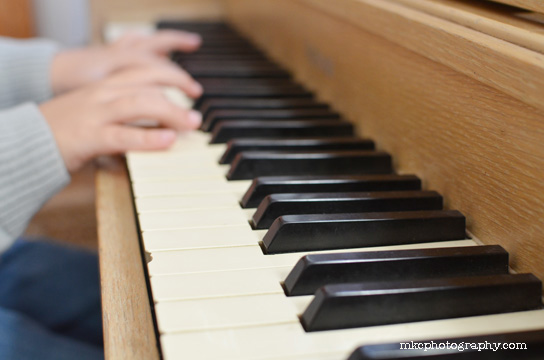 These little – well, not as little as the used to be – hands belong to a kid who’s only been taking piano lessons for one year. Why only one? Because he likes to write his own music and do his own thing, and until he was eight, he’d refused to let anyone teach him anything other than the names of the notes. But that didn’t stop him from composing complex songs that sounded like they came from someone who’d been playing for years.

We never pushed him to take lessons. In fact, I wouldn’t let him until he promised he’d actually listen to his teacher, actually do the homework, and actually put in the practice time. “It’s not just about playing songs,” I said, “it’s about being willing to learn.”

Last year, he finally asked us if he could begin lessons. We made him sign a contract (“I will not roll my eyes or sigh heavily when I have to do my homework,” etc). After whizzing through one year and five levels of piano books, comfortably playing complex musical scores by Hans Zimmer, and being told by his very talented first teacher that he’s no longer able to continue working with our child because our child has already surpassed his teaching capabilities, I’m now holding a very delicate world in balance.

I don’t want the terms “prodigy,” “gifted,” “special,” or anything in that vein to be applied to him. It’s too much pressure. I know he was born with this talent, but there’s a lot of living left to do for a nine year-old and I don’t think it’s fair to burden him with external expectations. Is he amazing? Yep. But he’s my kid, so I’d think he was awesome if he could only pluck out “Mary Had a Little Lamb” with his index finger on a toy piano. But I don’t tell him he’s special. I don’t tell him he’s the best. I tell him I’m proud of all the hard work he’s put into learning this instrument. I tell him I’m happy to see how much he practices, even though it’s tough work sitting up tall and holding his arms properly. I tell him things, to borrow a phrase from my dad, that he can take to the bank.

I’ll still always make him sign no-eye-rolling contracts, though, because I’m his mother and that’s my job.