Story Behind the Picture: “Sandy Paws” 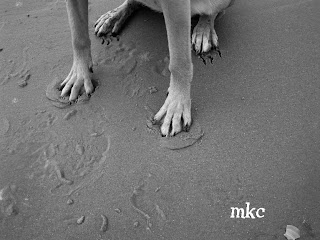 These are the (very large) feet of my dog, Sheba. You are probably wondering why I don’t have a photograph of Sheba’s sweet face, as I do of Bronco in this earlier posting:
http://mkcphotographybymichelleciarlo-hayes.blogspot.com/2008/11/story-behind-picture-old-friend.html
I have two answers for that: one, Sheba is a “lens licker” – try and point a camera in her direction and she will launch herself at you with eighty pounds of love and saliva, invariably leaving a big tongue-print on the lens. Two, Sheba was far too interested in saving a surfer than posing nicely for the camera. While I managed to capture her steady paws, she was barking furiously at the “imperiled” man on his surfboard (only he wasn’t in danger and didn’t need saving, but don’t tell that to my wannabe-Lassie who kept swimming out and harassing the poor man).
Sheba is a natural rescuer: she guards the stairs when my toddler is too close (there is a gate, mind you, but she seems to think it inadequate). She herded my oldest son away from the street when he made a dash for freedom (I was pregnant at the time and couldn’t run very fast. She may have taken her duty a bit far when she knocked him into the ivy bed and held him down with her front paw, but I was still grateful for her help). My favorite Sheba-rescue story of all time, however, is the day she diagnosed my appendicitis. I was feeling only mildly uncomfortable at the time, but she insisted on poking at my left side, crying, and finally, taking my sleeve in her teeth and dragging me over to the phone. I decided to listen to her and call my husband at work: by the time he drove home, fifteen minutes later, I could barely walk. When I arrived at the E.R., the doctors were amused – and amazed – that I would seek medical treatment on the advice of my dog. They also told me she was absolutely right.
People still ask us why we chose her from all the dogs at the pound. It wasn’t her webbed feet (Labrador?) or her huge ears (German Shepherd?) or her talented nose (??), and it certainly wasn’t her manners (bull in china shop?). We simply fell in love with a dog who needed saving and she’s repaid us countless times since then.