Story Behind the Picture: Skates 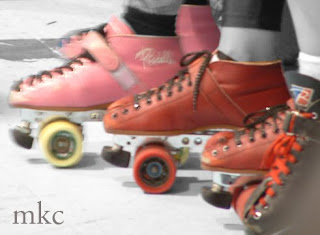 Roller Derby.
You can have your football and baseball. You can keep golf. You can even have basketball. After watching my sister-in-law skate in a Roller Derby tournament, that’s the only sport for me (to watch, mind you, not to play…I used to play rugby in college and it wasn’t half as rough as what I witnessed in that skating rink).

Do you need to understand the rules to enjoy it? Not at all: just cheer and scream for your friends (or sisters) as they fly around the rink and crash into one another. Somewhere, points are tallied. I think points should also be awarded to spectators who successfully avoid being hit by the occasional skater careening out of control.

We brought our two boys to witness the event: “Knock ’em down, Aunt DeeDee!!” became the battle cry of the evening. They sat on our shoulders and cheered louder than most adults could manage. They saw tough, agile athletes compete. They realized girls could play just as hard as boys. Would I ever lace up my skates? Heck no: I’ve seen the bruises on those women! But count me in as a fan of the unpaid, unpretentious, and unbelievable athletes of this awesome sport.