Story Behind the Picture: Trouble 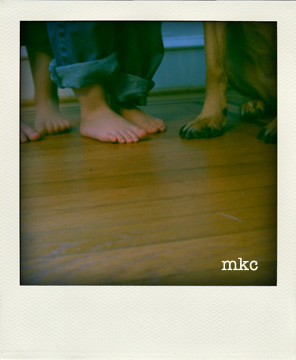 The largest pair belong to my six-year-old. He does not get up at 6:30. Or 7:00. Or 7:30. On school days, his feet are the first thing that greet me as I scale the ladder to his loft and attempt to wake him. I have, on his particularly sleepy/stubborn mornings, threatened to pull him down by his feet. These particular feet then stomp down the ladder, down the hallway, down the stairs with enough force to shift the frames of the artwork on the walls. Based on this preview of “annoyed adolescent behavior,” I’m really looking forward to the teenage years.

The last set of feet belong to the dog. I know you think it obvious to point out that she’s a dog, but if you ever heard her, you might assume we actually have a pet buffalo. Incidentally, she’s only mildly less destructive that what I assume a pet buffalo would be. These feet enjoy tunneling under fences, galloping on a repetitive path in my living room (which does lovely things to the carpet), and pawing at my husband and I at 3:00 a.m. because there are more tunnels to be dug in the yard and she’s behind schedule.

I’m not sure who first said the phrase “pitter-patter of little feet,” but I’m fairly certain, had they met my children and my dog, they may have said something else, such as the “stomping, running, tearing-through-the-house-and-shaking-the-cups-in-the-china-cabinet of little feet.” That, however, doesn’t fit on an embroidered nursery pillow.