Story Behind the Picture: Urban Hymn 6 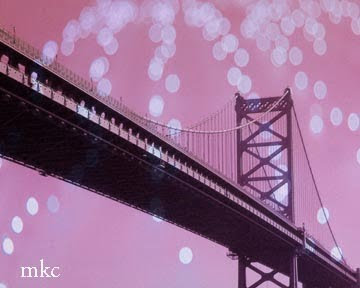 The Ben Franklin Bridge spans the Delaware River and connects the shores of Philadelphia, PA and Camden, NJ. My husband once said they only charge a toll in one direction because no one would actually pay to enter New Jersey. I personally don’t agree. You’ve all seen the “Jersey Shore” by now, have you not? Surely everyone in America would be happy to pony up $3 to experience all that New Jersey has to offer.

I shot this from the middle of the Delaware River on a Duck Boat. Yes, folks, we do live in the city, but we still rode the Duck Boat tour. On this particular tour – seated directly behind me – was an incredibly excited family from Austria. Has anyone witnessed the enthusiasm with which Austrians cheer their downhill skiers? It’s not unlike the rabid crowds during the Tour de France, or the Dutch during speedskating events. Apparently this Austrian fervor also translates to Duck Boat tours in the United States.

To say they enjoyed the experience would be a severe understatement of the facts. The ringing in my ears – due to the combination of constant duck-bill-quack whistles, cheering, and laughter at decibel 11 – has yet to fully subside. One positive? My children were no longer the loudest things on the tour.

Then, they pulled out the cow bell. Yes, the very same type of bell used to cheer skiers as they rocket down the icy slopes of their home mountains. One wonders if they traveled throughout the city with this bell, just waiting for the perfect moment to unleash it on their Philadelphian hosts.

So here it is, folks: the cow-bell-worthy version of the Ben Franklin bridge, where you’ll happily pay your $3 to come back home.