Story Behind the Picture: Waiting 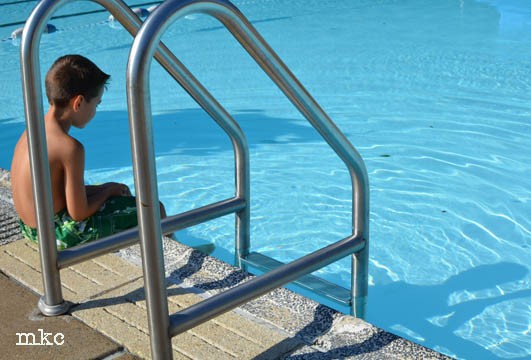 My child learned to swim this summer.

This might not be a terribly interesting statement, until you have a little more detail to go with it.

My child is in third grade.

My child struggled with a fear of putting his head underwater his entire life.

Just asking my child to jump into the pool during summer swim lessons was enough to trigger a massive meltdown, one where he changed instantly from an eloquent and charming little boy to the sort of kid who, if you saw him on the sidewalk, you might cross the street to avoid.

My child wailed and screamed unintelligible things and wouldn’t let me touch him.

My child closed himself off so completely into his own head that he couldn’t see the crowd of children and their parents staring at him, a mixture of pity and silent judgement written on their faces.

Some days, I wanted to shout “he’s got Aspergers – would you please all just give him a break!” but then I realized I would look like a crazy lady if I shouted things in public. So I never did. But I still really wanted to…

Then, this past spring, I found myself signed up for an event which required me, among other things, to leap from a 30-foot tower into an icy, murky, mountain lake.

I do not like heights. AT ALL. I once took up rock climbing to impress a boy and, as I clung with my fingertips to a very tiny crevasse 40 feet above the ground, I realized this was an unfathomably stupid idea and that I really, truly preferred having my feet on the ground.

I began to have nightmares about this obstacle. One morning at breakfast, Danny asked me why I looked worried, and I confessed my fear to him. “Just like how I’m afraid to jump in the pool,” he said, thoughtfully chewing his cereal. His fear of water lurked so close to the surface that he felt it the instant he sensed my own.

It is on this morning that Danny and I strike a bargain: he will hop in the swimming pool bravely later that summer if I promise to make the jump that I’m dreading most.

On the day of my event, I stood at the base of that tower and was shaking so hard that I felt truly, honestly tempted to bail, but the thought of being a hypocrite was far more painful than my fear, so I climbed. And I jumped.

This summer, Danny finally jumped into the pool with no meltdown, a triumphant smile on his face when he emerged from the water. He didn’t want to go in at first, but I reminded him of our promise, confessed how terrified I had been, how I’d kept my promise for him. And so, he jumped.

He learned to swim just one month later. He learned that the water closing over his head is not to be feared, but to be mastered by his own movement, and that he can pull himself out of a dark place if he just relaxes and lets go.

It is a promise – our promise – to be brave for each other that we carry with us, always.