Story Behind the Picture – “Watchful” and “First Day” 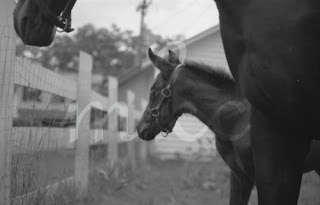 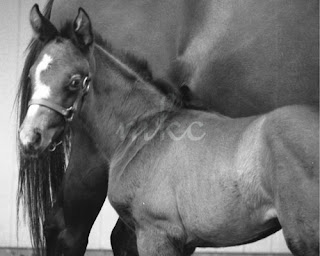 “There’s nothing so good for the inside of (wo)man as the outside of a horse.”
~~ author unknown

This day was long in coming – my mare was ready to be retired from competition. Her biological clock, so to speak, went into overdrive when she visited the breeding farm: she would often steal the foals of other mares, proudly parading the confused newborns around the paddock as though they were her own. Their mothers did not appreciate this.

It was with great joy that I finally felt her burgeoning sides swell and watched her grow rounder, yet become no less graceful, with each passing month. I moved from Virginia to Philadelphia before her foal was due to arrive, but I drove back south at first word that the baby had arrived. I missed the first wobbly hours of her uncertain steps and awkward legs – by the time I saw the new filly, still within the first twenty-four hours of her birth, she was already remarkably bold and adventurous, just like her mother. She had also discovered her teeth and enjoyed trying to nibble at my camera bag as I sat in the paddock with them. My mother came with me and complained about the flies (which were indeed rampant in the late-day heat). Luckily, the filly was quite interested in watching my mom swat at swarms of insects and I was able to take a number of shots…until, of course, she decided that testing her teeth on my shoelaces was even more fascinating.

She followed me to the gate of the paddock that day, despite her mother’s whinnies and reprimands. My mom laughed and consoled her, said she understood what it was like to have a daughter that didn’t listen. I laughed because I saw an adventurous little filly that would no doubt be as strong and fearless as her mother.