Story Behind the Picture: You Hung the Moon 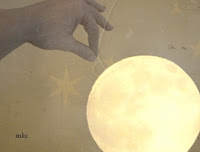 “Oh, I just thought he hung the moon.” My great-aunt’s words to describe the day she met her future husband – my absolute favorite saying – inspired this collage. Her blue eyes visibly deepen in hue when she remembers the day she met him on their first day of high school in 1937. He would later propose to her during a sunset flight in a twin-engine plane he flew over the New Jersey cornfields, just as the stars began to peek out from behind the darkening sky. It was 1941 and their plans for an elaborate wedding changed the next day: he received orders to deploy for World War II. They eloped instead, married at midnight by a Franciscan priest woken by their insistent knocking on the rectory door.

He never returned home: the plane he piloted was lost over the sea, the entire crew still missing today. It has been nearly 70 years since they stood together on that altar, the full moon rising high above, the priest smiling sleepily as they their exchanged vows, and my aunt has never found another who hung the moon quite the way he did.