Story Behind the Series: 52 Weeks 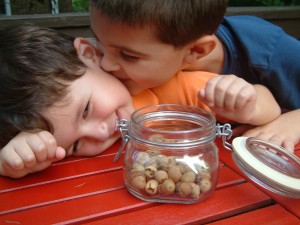 I’ve undertaken a project inspired by another photographer friend who is chronicling her pregnancy with a new self-portrait every week: when I saw the first 20 images of  Kimberly Turley’s “40 Weeks,” I knew I wanted to do something similar to capture one year in the life of my boys.

At nearly twelve weeks into the project, I’ve discovered this is NOT an easy task. One, I do not ordinarily photograph living/mobile objects. Two, these particular living/mobile objects tend to move around very quickly, pose with big fake smiles (that would be Danny) and launch a temper-tantrum protest whenever a camera appears (that would be Lucas). I’ve learned to be sneaky. I don’t want any fake smiles, I don’t want any posed creations. I just want to capture 52 fleeting moments as the seasons change and the boys grow, with their mother and her ever-present camera as part of their natural surroundings.

You won’t see any faux-woodland backdrops here, and you certainly won’t see perfect clothing, perfect lighting, perfect children. In the end, all 52 weeks will be printed into a book and given to two sets of grandparents who don’t normally get to see such every-day moments. If you have a camera and a child, you can do the same thing. Always carry your camera with you, never ask anyone to say “cheese,” and know that tears, unscripted laughter, and scraped knees are sometimes more beautiful than their Sunday best.